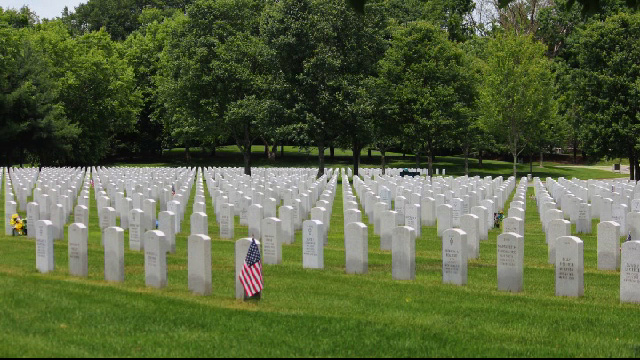 What to Expect at the Gerald B.H. Solomon Cemetery

Military Funeral Honors (MFH) is a tradition so important to our nation’s foundation and fabric our Federal Government voted the procedure to honor our deceased Veterans into law. The Department of Defense is legally required, upon family request, to provide every eligible Veteran a final tribute at no cost to the family. All MFH ceremonies performed at the Gerald H.B. Solomon Saratoga National Cemetery are coordinated between the local Funeral Directors and Cemetery staff.

At the Saratoga National Cemetery, MFH occur at one of the two Committal Shelters, as directed by the Cemetery staff. Honors will normally be rendered by Active Duty military representatives of the deceased Veteran’s military affiliation, supported by the Saratoga National Cemetery Honor Guard (SNC Honor Guard). If Active Duty representatives are not present, the SNC Honor Guard will perform MFH.

A. Arrival of Funeral Party

Each Shelter seats approximately 18 attendees, with one seat in front designated for Next of Kin, the recipient of the American Flag and rifle cartridges. The casket or urn is placed at the front of the Shelter, with either Active Duty or SNC Honor Guard personnel standing vigil on each side.
The Active Duty and SNC Honor Guard personnel wait for all attendees to arrive at the Shelter.

Once the attendees are assembled in and around the Shelter, the MFH Detail Leader initiates Military Funeral Honors, comprised of the following procedures:
• Introduction of MFH
• Three Rifle Volleys
• The playing of Taps
• Folding and presentation of the American Flag
• Presentation of 3 spent rifle casings
• Retire the Military Service Flag of the deceased Veteran
• The Final Salute

Upon command to initiate MFH, the Rifle Detail fires three rounds, which can be quite loud. The Detail then goes to the position of Present Arms, awaiting the playing of Taps.

Following the three rifle volleys, the Bugler plays Taps. During the playing of Taps, the Funeral Party is invited to stand, if able, and civilians requested to place their hand over their heart, while Active Duty members and Veterans are invited to salute.

F. Folding and Presentation of the American Flag

Following Taps, Active Duty or SNC Honor Guard personnel will formally fold the American Flag and present the folded Flag to the Next of Kin or designated recipient.

The SNC Honor Guard representative will present three rifle casings in memory of the three rifle volleys fired in honor of the deceased Veteran’s service to our Nation. The three casings represent Duty, Honor and Valor.

As the Military Service Flag is retired, the Rifle Detail and Bugler march in formation to the rear of the Shelter.

Following MFH, religious, funeral home and family representatives will typically conduct services and offer comments. The Cemetery representative will then request the Funeral Party to return to their vehicles and depart as MFH services are scheduled every thirty minutes depending on the day’s schedule.

Like all time-honored traditions, the rendering of Military Funeral Honors at the Gerald H.B. Solomon Saratoga National Cemetery incorporates some customs and traditions you may be interested in. Here are some of the most commonly-asked questions:

What Should I Wear?
Military service members are encouraged to wear their service dress uniform. Civilians are requested to wear clothing appropriate for a formal occasion and comfortable for the seasonal conditions, realizing that rendering of Military Funeral Honors is conducted outdoors.

How long does Military Funeral Honors and the following services last?
Anticipate 20-30 minutes from arrival at the Committal Shelter to completion of MFH and the following religious, funeral home and/or family services.

Can I Bring Children?
There are no restrictions regarding children attending Military Funeral Honors, and in fact are encouraged to attend in order to observe our Nation’s final military tribute to their loved one. The Funeral Home Director can offer guidance on proper decorum, and parents should remind their children to be respectful. Please keep in mind the rifle volleys are quite loud, so parents may want to cover their youngster’s ears during the three rifle volleys.

Should I Turn Off My Phone?
Absolutely. Phones should be in vibrate or silent mode. Audible notifications and ringtones are highly disturbing and disrespectful during this solemn event. Unless specially requested or allowed by the family, do not record the service or take photos until the ceremony is complete and the Next of Kin has received the folded American Flag.

Can I Bring Flowers?
Please check with the Funeral Party Funeral Director, or if not available, the Cemetery representative when assembling at the Visitor’s Center prior to proceeding to the Committal Shelter.