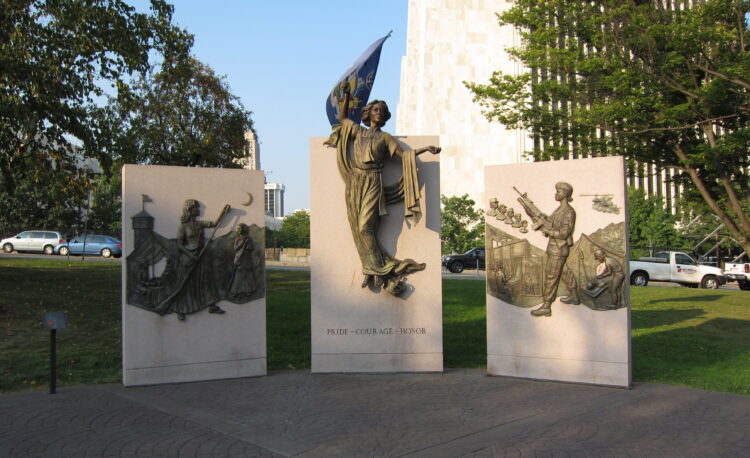 The New York State Women Veterans Memorial honors women in military service over the past two hundred years. The memorial is on Madison Avenue near the New York State Museum and is entered through a grove of Japanese zelkova trees. Dedicated in December 1998, the memorial serves to educate the public on the role of New York State women in the armed forces-past, present, and future. Currently, women make up fourteen percent of the active-duty military force. Of the more than 1.2 million women veterans, over 61,000 reside in New York State.

An eight-foot-high bronze statue by Albany artist Hy Rosen depicts Liberty standing on the crown of England (as in the New York State flag), breaking free from the bonds of colonization. The right arm is raised and carrying the state flag. The statue is meant to symbolize the spirit, strength, and commitment of the women who defended our nation and its principles, from the Revolutionary War to the present. It was cast at the Tallix Foundry in Beacon, New York.

Two cast bronze bas-relief sculptures with images of women veterans from all eras of service flank the figure of Liberty. Also included are several engraved historical plaques constructed in bronze. At the ground-breaking ceremony for the memorial in June 1998, Governor George E. Pataki said,

“Throughout history, women have made tremendous sacrifices serving our nation with distinction. We have a duty and an obligation to acknowledge New York State women veterans’ service in the name of freedom, and give family and friends a place to quietly remember their loved ones.”